The past couple weeks have been absolutely incredible, not only because of all the success our Bulldogs have had on the ice, but for our Foundation as well. As everyone now knows, this past Sunday, the Hamilton Bulldogs defeated the Sault Ste. Marie Greyhounds in game 6 of the final series to win the OHL Championships. All of the on ice success lead to tremendous amounts of community support at our home games.

The 3 home games during the OHL finals were our highest attended games of the year, which was capped off with 8,663 screaming fans this past Sunday afternoon. Along with their team support, these fans also came to the FirsOntario Centre with their generosity. The games we hosted during the OHL finals series were also, by far, our largest 50/50 pots of the season. During the 3 games, our 50/50 prize amounts accumulated to more than $42,000, leaving our Foundation with the same amount.

Thank you so much to everyone who came out to support the team and our Foundation over the course of the playoffs and all year long! If it wasn't for you, our Foundations Breakfast Program which feeds over 16,000 children daily, and our other initiatives would not be where they are today.

Also, the amazing amount of money we were able to raise would not have been possible without the help of some amazing volunteers from FirstOntario Credit Union. These great people took time out of their busy schedules in order to diligently sell 50/50 tickets during our games.

Hope to see everyone out again next season, and make sure to continue to cheer on your Bulldogs this weekend at the Memorial Cup in Regina!

Pictured above is long-time Bulldogs fan, Robin MacPherson aka 'Bones' who was lucky enough to take home one of the big 50/50 pots during the OHL Championship Series. Congratulations Robin! 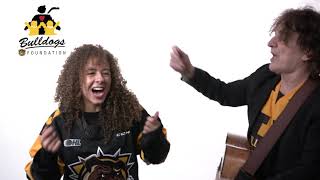 The Bulldogs Foundation is proud to be supporting the Ticats Eastern Final 50-50!